These claims have been picked up by the Catalan media and they provide Barca’s stance on Martínez and the Gabon international.

Mundo Deportivo have backed up claims made in Italy about Antonio Conte’s side rejecting a proposal of €70m plus Junior Firpo for the Inter striker.

The Serie A side are showing no signs of lowering the attacker’s valuation, and he has a €111m release clause valid between July 1st and 15th.

If Inter decide not to lower their demands for Martínez, Quique Setién’s side would activate ‘Plan B’, which is to sign the Gunners forward.

With a contract at the Emirates until 2021 and having turned 31 years of age earlier this month, Mundo add the ex-Borussia Dortmund star will be a cheaper option than the South American.

The British press has also talked about Aubameyang being an option for the Camp Nou side. Wednesday’s edition of Sport relayed these claims and also provided a short update on this case. 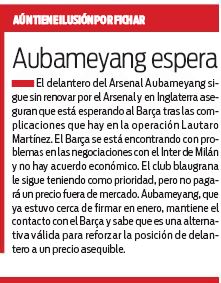 It’s claimed Mikel Arteta’s man, who was already close to signing for Barcelona in January, ‘maintains contact’ with the Spanish champions.

In addition to this, the Arsenal player is also aware he is a ‘valid alternative’ to strengthen Barca’s attack for an affordable price.

With Inter unwilling to change their stance on Martínez, Barca could make an approach for Aubameyang this summer.