Celtic are one of the clubs interested in Real Madrid’s Takefusa Kubo, according to AS.

The Japan international is on loan at RCD Mallorca and has managed three goals and two assists in the league this season.

Neil Lennon’s side have joined Ajax, Lazio, AC Milan and nine other Spanish clubs in expressing interest in the 19-year-old.

According to the report, Celtic and the other clubs have made their interest in the attacking midfielder known to either his surroundings or to the La Liga side.

In addition to this, Paris Saint-Germain are also insisting on signing the youngster and their sporting director Leonardo has moved for him.

However, PSG received a ‘resounding’ no from both Kubo and Real Madrid. The player has a €250m release clause in his contract. 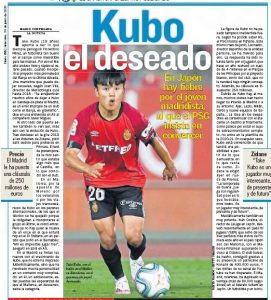 Despite all of this, AS add Zinedine Zidane’s side are willing to let Kubo find another club this summer, if they exceed the non-EU quote for the next season.

In other words, Real Madrid could allow the teenager to go out on loan for one more season and it could provide Celtic an opportunity to take him on a temporary deal.

However, the Bhoys are expected to face tough competition from other clubs for the  signing.