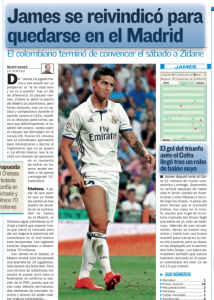 The Spanish media simply won’t give up on the idea Chelsea have genuine interest in James Rodriguez.

Follow up claims from the British media have obviously encouraged everything and this rumour is going to last right until the end of the transfer window, after which it will likely kick off again ahead of the next one.

Monday’s edition of AS says that Chelsea are prepared to pay €70m (around £60m) to get a deal done for James before the window closes on Wednesday night. But, surprise, surprise, it’s stated Real Madrid are holding firm and the player has shown a new found commitment, and is winning the fans back.

He managed to do all that in 21 minutes against Celta Vigo at the weekend.