Lazio are planning to continue their pursuit of Chelsea duo Emerson Palmieri and Ruben Loftus-Cheek, with the former their prime target.

That’s according to Corriere della Sera’s Rome edition, who say the two clubs will ‘continue to negotiate’ a deal for the Italy international.

They report that Lazio have an ‘appointment’ planned with Chelsea to discuss Palmieri and Loftus-Cheek, who are two players that manager Maurizio Sarri ‘likes’.

Palmieri is the one that the Italian side ‘needs most’ but Chelsea are refusing to sell him for less than €15m at this moment in time.

It will also take €4m to cover his wage demands.

Thus the two clubs will continue to negotiate a potential deal for the player, regardless of separate negotiations for midfielder Sergej Milinkovic-Savic, who Lazio are refusing to give discounts for. 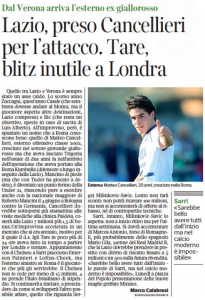 At the moment there is no hint that a deal could be struck that involves players being exchanged and that is not in Lazio’s thinking either.

Club chief Claudio Lotito ‘will not be satisfied’ with such an offer for his midfielder, hence the two negotiations remaining separate for now.

That stance can always change, of course, but for now further negotiations with Chelsea are needed is Sarri is to be reunited with Emerson Palmieri.