Home Premier League Chelsea Chelsea player has made mind up on transfer – Has an idea...
SHARE

Chelsea midfielder Tiemoue Bakayoko wants to return to AC Milan this summer but is not a priority for the club as yet.

That’s according to Corriere Dello Sport, who say that a need to balance the books means Bakayoko could be left waiting for his preferred move.

The newspaper explains that Milan have a month to close the gap between income and expenditure, and while it is not the guiding principle of their plans, it is important.

Their plan is to sign players for as little cost as possible, and so targets like Nikola Vlasic or Bakayoko would preferably arrive on loan with a right to buy.

In terms of the Chelsea man, it’s stated that he is a name the Rossoneri ‘will keep last’, probably alongside teammate Hakim Ziyech, in their list of priorities.

He would ‘gladly return’ to Italy and Milan, but those in charge, Paolo Maldini and Frederic Massara, will ‘dictate the conditions’ if that is to happen. 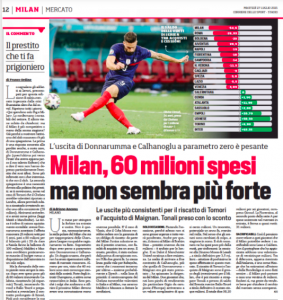 In other words, they will only do a deal on their terms and not what Chelsea are looking for, which is likely to complicate matters.

That’s because Bakayoko only has a year left on his deal, so it seems unlikely the Blues would ever sanction a loan deal, given the player would be allowed to leave on a free at the end of it.

Unless he signs a new deal and then departs, a loan is surely going to be off the table, scuppering both the midfielder and Milan’s plans.