The transfer of Fabio Silva from Porto to Wolverhampton Wanderers is being investigated by Portuguese authorities, according to claims from the country today.

Newspaper Correio da Manhã writes that local authorities want to understand the details of the operation and why the Dragons didn’t receive a bigger percentage of the €40m fee paid by the Premier League side.

It’s pointed out that from the commissions distributed by Porto, €7m went to Gestifute and €3m to STV, a company which belongs to Fabio Silva’s father.

Still, PP Sports, owned by agent Pedro Pinho, charged €500k, plus taxes, to Jorge Mendes’ organisation, instead of receiving that part directly from the club.

Pinho is key for the investigation, since he’s one of the figures being watched by the Portuguese Public Ministry and Tax Authority. 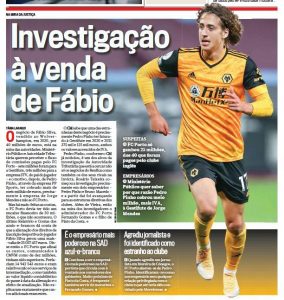 The other issue here is that Porto were supposed to have kept around €30m following those payments, and that didn’t happen. In their official financial report, they say Fabio Silva generated a profit of €25.057.457. They never explained the details of those extra costs.

Correio da Manhã points out that this is part of a big operation in Portugal which has been investigating several issues involving agents, Porto and Benfica. A couple of weeks ago, the Eagles president Luis Filipe Vieira was even arrested by local authorities and is now removed from his position at the club.