For some unknown reason, no one in Italy appears to be able to agree on what Chelsea’s stance is when it comes to Nicolo Barella.

The Cagliari midfielder has been linked with a move to Stamford Bridge for a number of weeks now, with a claim going as far as saying the Blues wanted a deal done before Christmas, yet here we are on January 8th, and nothing has happened.

Monday saw an article from Corriere dello Sport suggest Barella wasn’t even their priority, as Leandro Paredes had more experience under his belt, meaning Marina Granovskaia would be willing to spend more on him.

This was then echoed by Sky Sport, who stated some at Chelsea (not Maurizio Sarri) were ‘not entirely convinced’ by the 21-year-old. 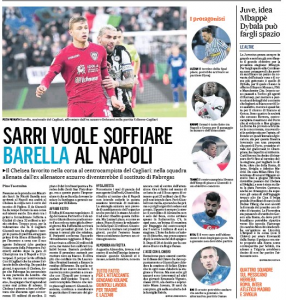 Il Mattino, however, go in the complete opposite direction, claiming the Premier League side are ready to blow the competition out of the water, prepared to slam £55m on the table.

They follow that up by stating that should Barella leave Cagliari in January, it’ll only be for Chelsea.

Honestly, at this point, we’re a little bit lost.

Il Mattino are close to Napoli, who are also interested in Barella, so that might be where they heard of Chelsea’s plans.

As for Chelsea not being ‘convinced’ about Sarri’s choice of Barella, surely if you work as hard as the Blues did to get bring a manager in over the summer, you give him the players he feels are ideal for his way of playing?

If that’s the Cagliari youngster and not Paredes, why would, or even should, Marina Granovskaia be the one to decide the Argentine represents better value at €50m if he isn’t the Italian’s first choice?

It’s all a bit all over the place, if you ask us.