Back when Cesc Fabregas was first being linked with Milan, Maurizio Sarri made one thing very clear: the Spaniard would only leave if he was then replaced.

With the former Arsenal midfielder now on his way to Monaco, it appears Chelsea have decided it best to cash in while they can, but for fear of upsetting their new manager, they’ll now have to find someone else.

According to Corriere dello Sport on Monday, that person will be one of two players: Cagliari’s Nicolo Barella or Zenit’s Leandro Paredes.

Not only have they highlighted two potential targets, but they’ve also decided they want to get a deal over the line in the next week. 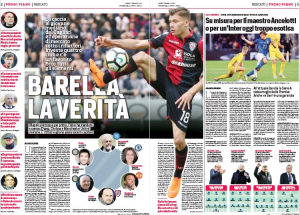 If they decide to go for Barella, this would give the Serie A club the chance to find a replacement before the end of the transfer window, but the journalist behind the article doesn’t believe Chelsea and Marina Granovskaia are prepared to match the price tag (€40-50m) set by Tommaso Giulini, Cagliari’s president.

The belief within Stamford Bridge is that Roman Abramovich’s right hand will only go as far as €35m for Barella, and would be far more prepared to splash €50m on Paredes instead due to the Argentine’s more ‘relevant CV’ (he’s four years older).

However, with Gianfranco Zola at the club, who knows Cagliari well, having managed them briefly during the 2014-15 season (and gave the young midfielder his professional debut), they have a way in that means a deal could be done rather quickly.

Either way, Giulini would much rather see his protégé leave in the summer, and unless someone puts €50m up front on the table in January, that’s most probably what will happen.