The Ligue 1 outfit have already held talks with the player’s surroundings on two occasions, but are aware the deal to sign him would be complex.

Apart from the sports project, the French champions will have to meet his current salary of €12m-a-year. The midfielder is adapted to his life in London and PSG have to convince the player to leave Chelsea to join them.

PSG will not be able to sign the player soon, even if they manage to convince Kante. The 27-year-old has told his agent not to contact him regarding his future until the end of France’s campaign at the 2018 World Cup.

Any approach from Thomas Tuchel’s side in signing Kante will see them spend around €100m. L’Equipe claims PSG have a solution to reduce the price tag by offering Adrien Rabiot to Chelsea. 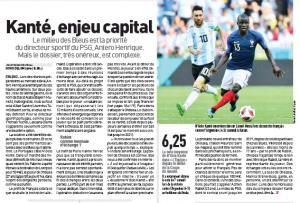 The 23-year-old has one year left on his contract at PSG and Chelsea are one of his admirers. The Premier League side have been chasing the midfielder since he was 17 and they have never broken ties with his mother, Veronique Rabiot, who is also his agent.

The Blues have exchanged talks with Rabiot’s representative recently and he could be offered to Chelsea which will then allow PSG to sign Kante.