Chelsea midfielder Tiémoué Bakayoko has agreed on personal terms with AC Milan ahead of a possible move to the Serie A side this summer.

That’s according to Gazzetta Dello Sport, who say Milan are yet to find an agreement with Chelsea over a possible transfer.

Bakayoko spent last season on loan with AS Monaco but failed to impress, the French club electing against turning his move into a permanent one.

That means he is on the hunt for a new club again this summer, with there seemingly no place for him in Chelsea’s first-team.

Milan are keen, Bakayoko’s name having ‘reappeared’ on their radar in recent months following a year-long loan spell at the club back in 2018.

He is a midfielder they like, so much so that they have ‘agreed with him’ on his wages should he move to the club this summer.

Bakayoko currently earns around €6m a year at Stamford Bridge but has agreed to drop that to €3m a year plus bonuses to try and secure a return to a club where he ‘had a good time’.

Milan, though, still need to find an agreement with Chelsea. The Blues paid €40m for Bakayoko three years ago, and while some of that has been amortised, they will set an asking price that ‘allows a capital gain’. 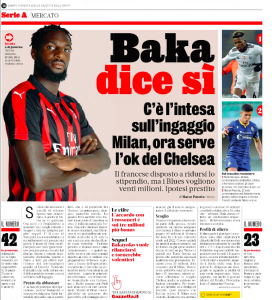 Gazzetta believe this will be around €20m, which would be too much for Milan who will ‘certainly talk’ if that can be reduced to €15m.

Thus, they need to ‘tackle the Chelsea rock’ to discover if there are ‘alternative solutions’, for example, a loan with a right to buy.

Whether that would suit Chelsea, who have already spent big on the likes of Timo Werner and Hakim Ziyech this summer, isn’t mentioned.

But, with an agreement already in place over wages, Milan certainly have one foot in the door to getting to Bakayoko back this summer.