Tuesday’s edition of A Bola has a couple of small articles on Bruno Fernandes’ situation.

Sporting face SC Braga this evening in the Taca da Liga, and the midfielder is expected to start the match. First up, A Bola say both Manchester United and the Lisbon club are showing signs of being willing to compromise, which is a much better situation than the pair sat in opposite corners sulking at each other.

Whilst ‘a deal remains to be concluded’ it’s thought to be ‘perfectly possible’ it will happen. An official from the Premier League club will be at Sporting’s match tonight, with it being stated it’s to see Bruno.

Not a lot should be made of that, Manchester United have had an official at almost every Sporting match for some time, and they also watched Braga’s last match.

A Bola’s second article is on their back page, which is unusual and perhaps suggests it was last minute information before going to press. They build the drama, saying Bruno remains an ‘intense desire’ of the Red Devils, and then add, making it clear it’s according to their own information, that United are willing to ‘put new numbers on the table’. 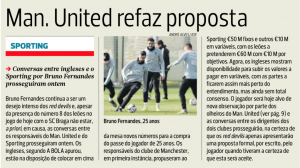 What will be crucial is what those variables are based on. If it’s a reasonable level for bonuses then this could all be good news, if it’s Ballon d’Or pie-in-the-sky nonsense then it makes little difference whether it’s €10m or €20m.

Record say there were no new developments when they went to print last night, at least developments of the kind which would take Bruno out of the Braga match.

They do say that yesterday ‘the manager (Miguel Pinho) of Sporting’s No. 8’ was meeting with Hugo Viana, sporting director, at the Lisbon club’s HQ. 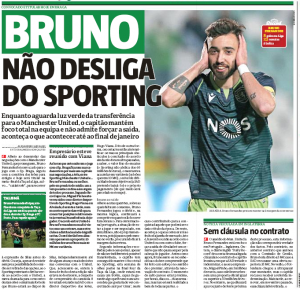 Record then add: ‘In other words, contacts are intensifying but the main obstacles to the conclusion of the agreement have not yet been overcome, namely, the fixed amount of the proceeds (Sporting does not give up €60m), the amount to be taken into account in variables (the lions want €10m), the level of difficulty of these objectives (Sporting intends to lower it) and the payment itself (how it will be divided in time).’

The Portuguese newspaper has a separate article saying that claims on Monday of a clause in Bruno’s contract (meaning Sporting would have to pay him and Pinho €5m if they receive a €50m offer) are incorrect: ‘Record found from a source close to this case, this information does not correspond to the truth of the facts.’

Just like A Bola, they say both sides are now ready to give ground on their initial claims.

According to O Jogo, United were offering €50m plus €10m in bonuses, as their initial offer, and now there’s another €5m in variables to be added. Of course, it will again depend on what those bonuses are based on. 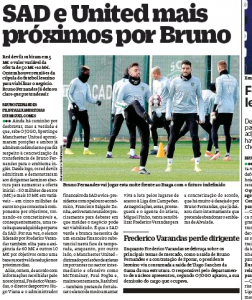 O Jogo believe United are ready to make this bonus ‘achievable’, and add: ‘In turn, the squad led by Frederico Varandas also looks at the requirement of €60m and another €10m for goals as a base that can be reduced in the coming days.’

Bruno himself, is said to have already ‘made it clear he wants to leave’.

Sporting’s great and good held a meeting on Monday, with the insinuation this is so they can lower their asking price from the €60m + €10m.

This all sounds relatively positive, but it must be said, again, it depends what the bonuses are based on.