Earlier this week, Brighton & Hove Albion manager Graham Potter admitted the Seagulls are looking to recall Percy Tau from his loan spell at Anderlecht in the winter market.

The South Africa international, who moved to The Amex in 2018, was allowed to go out on loan to the Jupiler Pro League side during the last window.

Brighton allowed the winger to go elsewhere on a temporary transfer because of his failure to obtain a work permit.

However, with new rules coming into effect from January 1st, the 26-year-old should be eligible to play in England in 2021. Anderlecht manager Vincent Kompany has already stated there is a ‘good chance’ Tau’s loan deal could be cut short in January.

Saturday’s edition of Gazet van Antwerpen have once again relays Kompany’s comments about the Brighton man, and adds that at Anderlecht ‘it’s assumed’ Tau will return to his parent club.

That’s because Brighton chairman Tony Bloom ‘believes’ in Tau, especially now that the Premier League side are just above the relegation zone.

The newspaper further adds there are certain clauses in Tau’s contract, and if those conditions are not met, then the Belgian side will have to pay for the loan deal. 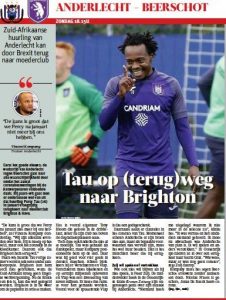 Therefore, it might be better to allow him to return to England. This doesn’t mean the Belgian side had a chance of retaining the player in the first place.

Anderlecht never had an upper hand because Brighton have an option to recall Tau in January, and both Potter and Kompany have now admitted the Seagulls could exercise that option.