Girona were relegated from Spain’s top division this summer and one of the players who could leave the club is Cristian Portugués Manzanera, commonly known as Portu.

Today’s edition of Mundo Deportivo explains there are 13 clubs who have asked the Spanish club about the attacking midfielder and this includes Brighton & Hove Albion and West Ham United from the Premier League.

Real Sociedad are also interested in the 27-year-old and there are claims the San Sebastián side are very advanced in agreeing a five-year deal with the player.

Girona need €10m to sanction Portu’s sale, but Sociedad do not have that amount to close the operation, which is why they are looking to find out if they can pay the fee in installments.

Though Sociedad are a strong option for the former Valencia man, the Catalan newspaper claim he hasn’t yet made a decision on his future as of now. 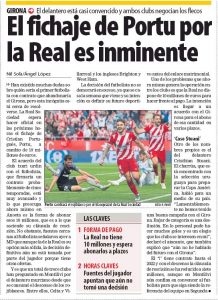 This is because Portu continues to draw attention from other clubs, including from Brighton and West Ham.