It was also claimed the forward is waiting for a visa for the deal to take shape.

Het Nieuwsblad once again relay the Jupiler Pro League side will sign the African on a season-long loan deal, and further go on to provide a short update about the 25-year-old.

The report states Tau has already been spotted in Bruges and his transfer is ‘almost complete’. 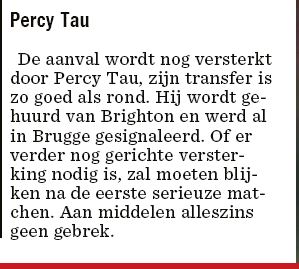 However, Het Nieuwsblad provide no explanation as to what is stopping all parties involved from getting the deal over the line.

A loan move to Brugge will help Tau gain more experience in Europe, which would improve his chances of obtaining a work permit to play for Brighton in the future.