Home Premier League Brighton Brighton man ‘more out than in’ – Player’s situation manages to get...
SHARE

Brighton and Hove Albion striker Florin Andone’s loan spell at Cadiz took another miserable downturn this week as he was left out of the squad for the Copa del Rey.

That’s what Diario de Cádiz cover today, explaining how the striker is getting further and further out of the picture at the Spanish club.

He joined them on loan from Brighton in the summer but has managed just three appearances, with it becoming clear very quickly that the loan move was not going to work out.

This week should have provided him with an opportunity for some minutes as the squad was rotated for the first round of the Copa del Rey, but that did not prove to be the case.

The newspaper explains that while coach Álvaro Cervera used a ‘completely different eleven’ for the game and used it as an opportunity to give playing time to the ‘less regulars’, Andone was nowhere to be seen. 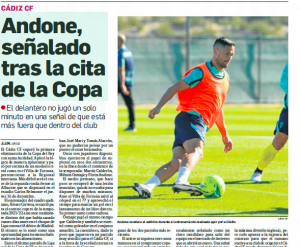 He is the only player available in the squad who has not managed a single minute in the last two games, even though the cup game was more like a training session than a competitive game.

That was seen as a further demonstration he is ‘a clear candidate’ to leave the team in the winter transfer window when it opens in January.

He is ‘more out than in’ at this point, and unless there is an ‘unexpected turn of events’, it is very likely that his contract will be terminated so he can return to Brighton and Cadiz can move on from a disastrous deal.