Over the past few days, we’ve seen a couple of surprising stories in Italy concerning an English interest in Brescia’s Leonardo Morosini.

First, it was Brighton & Hove Albion who reportedly ‘desired’ the 24-year-old at the Amex Stadium for the second half of the season, before Birmingham City were mentioned on Wednesday as a surprise late entry in the race for the attacking midfielder.

Pep Clotet was reportedly trying to use his relationship with Massimo Cellino (from his time at Leeds) to his advantage, but it appears it wasn’t enough.

According to Corriere dello Sport on Thursday, Morosini has decided to turn down the advances of both Brighton and Birmingham in favour of signing for Ascoli, who were always mentioned as the leaders, as he ‘preferred that destination’. 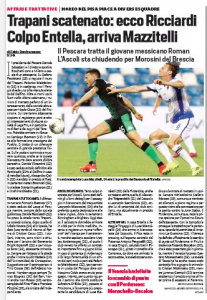 It’s stated the ‘final details’ are being sorted out for the playmaker’s transfer, and he is expected in the city to undergo his medical ahead of his contract signing.

A blow for both Graham Potter and Clotet, it seems, if they were ever really interested, that is…