It’s no exaggeration to say that Romelu Lukaku is a player that splits footballing opinion, regardless of what country he’s playing in.

The Belgian striker is a consistent subject of conversation in the footballing world, with some fans loving him and others hating him.

That was certainly the case at Manchester United, and it’s a problem that’s followed him to Italy with Inter Milan.

His time at Everton, though, provides a perfect example of it in action. While there are some at Goodison Park who rave about his performances to this day, particularly his goalscoring record, there are those who still say he was too lazy or didn’t care enough.

Samuel Eto’o was a brief teammate of Lukaku’s at Everton, and it seems he falls very much into the group of people who love the striker, regardless of his apparent flaws. 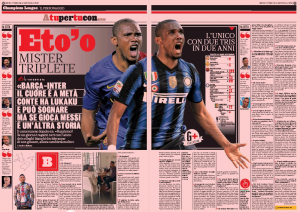 When asked by Gazzetta Dello Sport whether he likes the striker, he replied “on and off the field” before explaining why that’s the case.

“We were together at Everton,” he said.

“(He’s) big in size but like a baby. (He’s) very smart, even if he’s young and he said important things about racism.

“There are footballers who feel like stars and others are normal people: he is in the second group. And you will see how many goals he will score.”