Samuel Umtiti’s contract at Barcelona runs down in 2021 and the Catalan club have long been working to sort out his future. Though the defender has three years left on his contract, his €60m release clause is something that shouldn’t be an issue for top clubs to match.

Spanish newspaper AS claims the former Lyon central defender is still hoping for his representatives to help him get an improved deal. Barcelona technical secretary Robert Fernandez has decided to come up with a plan and it is believed, the talks are going “the right way”.

There were rumours that Manchester United had identified Umtiti as a transfer target. The AS report today claims Jose Mourinho’s side were never interested in signing the centre-back this summer, while a few other clubs think of him as a target for the future.

A source close to Barcelona told AS they remain optimistic that Umtiti will sign a new deal, even though they are at a point of “tug-of-war”. 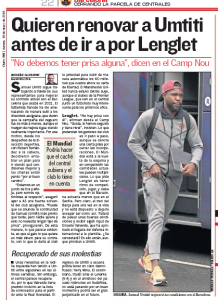 “We are at a point of tug-of-war, but we are optimistic about it. We may announce the continuity of Samuel (Umtiti) sooner rather than later. However, this does not need to be done in a hurry,” a Barcelona source was quoted as saying by AS.

Clement Lenglet has been heavily linked with a move to Barcelona, but even though the Sevilla defender is a target for Ernesto Valverde’s side, their priority is to tie down Umtiti to a new deal and insert a release clause higher than €60m.