For a while now, Frenkie de Jong has been popping up in the Catalan media and it’s been explained Barcelona are very keen.

Matthijs de Ligt is probably the Ajax player most linked to Barca, Justin Kluivert gets the headlines but isn’t as highly rated by fans of the Dutch club, and then De Jong seems to bring around a real excitement.

He’s not ready yet, that’s a widely accepted situation, but the 21 year old midfielder is bursting with talent. And, unlike with Kluivert, that’s a stance pushed enthusiastically by Ajax fans too.

De Telegraaf report on Monday that Barcelona have a plan to sign De Jong. The club ‘does not seem to respect’ insistence from Amsterdam that the player isn’t for sale, and are trying to push the idea of signing him now then loaning the youngster back.

As covered in both the Netherlands and Spain, Barcelona want to beat other interested clubs. Pep Guardiola’s Manchester City are presented as keen, as are PSG. 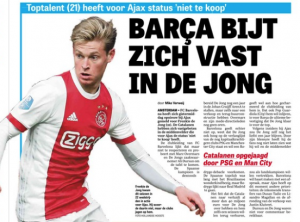 Barca have been following De Jong for years and don’t want to lose out to Man City or PSG at the last minute. That’s a scenario which looks to be happening with Rodrygo, with the Brazilian now looking likelier to sign for Real Madrid.

So the Catalan club are trying everything to get in there ahead of others, but right now, according to De Telegraaf, Ajax aren’t listening.