Journalist Miguel Rico, writing on the last page of Mundo Deportivo explains how the ‘change is radical’ for Barcelona to sign Antoine Griezmann in 2019 when compared with last summer’s situation.

In 2018, only the La Liga winners were after the Ateltico Madrid star, but now the likes of Manchester United ‘has entered the scene’, along with Bayern Munich and PSG.

Before the start of this campaign, the Catalan club could have signed him for €100m. The World Cup winner turned down an opportunity to make a switch to the Camp Nou and signed a new deal with Diego Simeone’s side.

With that, his release clause was raised to €200m and that will come down to €120m from July 1st.

Last summer, the Spanish champions were willing to offer him a net salary of €17m per season and they have no intention to offer him a better deal, if he decides to join them.

Mundo explains Manchester United will not have any issue paying him more than what Barca are willing to offer, especially when they are already paying a lucrative salary to Alexis Sanchez.

Having announced his decision to leave the Spanish capital club, Griezmann has so far not revealed his next destination. Though earlier reports suggested Barcelona would likely be his next destination, Rico says there has been no agreement so far for the transfer. 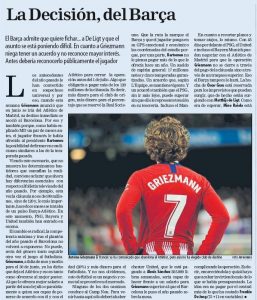 This has allowed Ole Gunnar Solskjaer’s side to enter the scene and they can complete his deal before July 1st, if they are willing to negotiate a higher price (more than €120m) with Atletico before the end of the month. However, they must also convince Griezmann to join them.

It would be a huge surprise transfer if Griezmann joins Manchester United, but the Catalan media are insistent there’s no agreed Barca deal. There’s also quite a negative reaction to the player, with claims today he’s ‘spoilt’ and ‘arrogant’ and that the Spanish champions should walk away.