Porto midfielder Danilo Pereira has been promised he can leave the club this summer, amid reports Arsenal are ready to make a move for him.

The Gunners were linked with a move for the Portuguese midfielder yesterday, with ESPN claiming they had identified him as an alternative to Atlético Madrid’s Thomas Partey.

ESPN claimed Arsenal were looking to make their move as Mikel Arteta is keen to improve his midfield, and had put aside €20m to try and get a deal done.

Those reports have now been picked up on in Portugal and, according to A Bola, Arsenal may have a chance of getting their man.

The newspaper covers the initial report of Arsenal’s interest and explains that a move to the Premier League remains a ‘dream’ for Pereira, who has never hidden his desire to play in England.

That dream could become a reality, with Porto ready to accept a deal worth far below the €60m release clause in his current contract.

It’s believed that the Coronavirus pandemic has seen a ‘devaluation’ of players across the board and that has affected Porto’s valuation of Pereira.

They turned down a €30m bid from Monaco last summer, deeming the player ‘non-transferable’ at that point in time but have changed their stance since then. 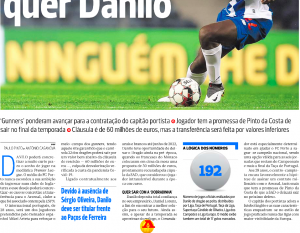 What price they would be willing to accept isn’t mentioned, but Porto chief Pinto da Costa has promised the player he can leave at the end of the season.

Initially, that agreement was if his €60m clause was met, but the transfer ‘will be made for lower values’ as far as A Bola are concerned.

For the time being the player is focused on helping Porto finish the season and hopefully win the title, as well as winning the Taça de Portugal.

He is, though, ‘looking favourably’ on a potential ‘semi-million dollar’ contract with Arsenal and has ‘total confidence’ that his manager, Daniel Lorenz, will secure the move for him.