You might have heard rumours on the interwebs, but Inter aren’t entirely happy with Christian Eriksen, who’s largely failed to produce since being signed from Tottenham in January.

The Dane has struggled to adapt to Antonio Conte’s demands, and the latest from the Italian media suggests he could be offloaded at the first opportunity.

Down their end, Inter want a more defensive minded midfielder, with N’Golo Kanté at the top of their manager’s list, but Corriere dello Sport claim another option is being studied: Arsenal’s Granit Xhaka.

The Italian newspaper explain ‘there are at least a couple of intermediaries who are probing the availability of Premier League clubs to set up an operation’ for Eriksen, and among them are the Gunners.

It’s stated ‘wearing the Gunners shirt would allow him to return to ‘his’ London and perhaps allow Inter to have a technical counterpart of great value’ in Xhaka.

Sitting on the bench in the past two league games, the Swiss ‘is no longer the immovable player of the past seasons’ following the recent arrival of Thomas Partey, and it’s a ‘clear signal that it could push him to reflect on his future’. 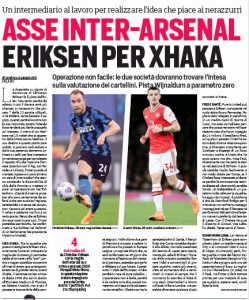 While he ‘does not have the characteristics of Kanté’, he certainly would fit Conte’s ‘chessboard’ better than Eriksen, as ‘he could free Arturo Vidal and allow him to play a few metres ahead’.

As things stand, ‘the exchange is the idea of one of the intermediaries, but it could become something more concrete in the short term’.

The big question in all this, however, is whether or not Eriksen, who spent so long at Tottenham, would be willing to turn his back on his former club and sign for their North London rivals.