Home Europe The 4 signings Barcelona are on verge of making – Monday presentation...
SHARE

Barcelona was overtaken by a wave of optimism when Joan Laporta was elected to return to the club are president.

There quickly followed big claims of potentially signing huge stars like Erling Haaland and Neymar, however, the cold and hard reality of the club’s finances soon pushed that to one side.

Summer for the Blaugrana was going to be low cost, and any significant signings would have to be funded by players leaving Barcelona.

Friday’s edition of Mundo Deportivo has a report on incomings which could be completed in the coming days and weeks.

According to the Catalan newspaper, a final meeting on Thursday with Georginio Wijnaldum’s agent means the deal is close to being finalised. Everything is ‘almost ok’ and there doesn’t seem a great deal of worry the move could collapse.

Then there’s Memphis Depay, Mundo report Barcelona are working on signing the attacker, who just like his international teammate is available on a free transfer.

The Lyon forward is an ‘express request’ of Ronald Koeman, and it’s explained Depay could decide to shelve the deal if the Dutch manager is imminently sacked.

That feels unlikely, the attraction towards the Camp Nou for the Dutch international is hardly going to be solely related to the manager, and Depay turning Barcelona down doesn’t seem a realistic scenario at this stage.

Then there’s Emerson, whose confirmation is expected shortly, with Betis getting around €9m for their side of the complicated transfer bargain. 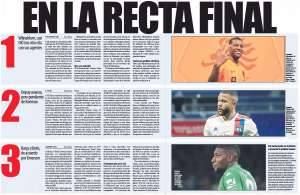 Eric Garcia is the fourth, and he could be presented as soon as Monday, arriving as a free agent from Manchester City.

Should Pep Guardiola’s side win the Champions League on Saturday, it’s assumed a victory parade will be held on Sunday, and then the defender can be presented as a signing at the Camp Nou the following day.

If there’s a slight delay with the defender’s medical then the big event could be delayed a day or two.