Manchester City target Tiago Djaló continues turning down the chance to renew his contract with Sporting, the Portuguese media says.

Newspaper A Bola claims that the Lions have been offering the player a new deal since the summer, and he continues to be ‘uncompromising’ about it.

That’s why A Bola considers that he’s now ready to leave. Djaló can already sign a pre-contract, or wait until the summer and join any other club for free.

The outlet doesn’t seem to know much about who is he signing for. They say there are several clubs recently linked, headed by Manchester City, but AC Milan’s interest has been reported by the Italian press this week as well. 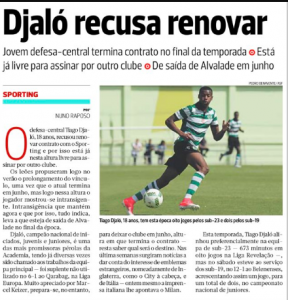 Interestingly, the very same A Bola had a report last week saying Manchester City made Djaló a personal offer, and the salary offered by Pep Guardiola’s side was much better than Sporting’s.

Now they seem to forget it and only say ‘there’s been news’ about Manchester City’s chase for the player.