Home Europe Man United interest in player not as new as presented, goes back...
SHARE

While we cover a lot of transfer rumours, it’s reached a stage where there’s so many updates that we often skip past a few mentions (mostly Matteo Darmian), as they often offer nothing new.

Other times, like today, we notice something that might not be factually correct, in this case because someone else has reported it before.

Take Corriere dello Sport‘s article about Roma’s transfer situation where they state ‘even’ Manchester United are looking at Cengiz Under in their subheading.

Then, at the end of the article, which is mostly about the Serie A side needing a new midfielder, they explain the ‘latest to place themselves’ on the Turkish winger are the Red Devils, suggesting it’s a recent thing. 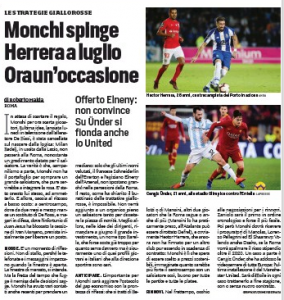 A look in our archive, however, shows us that Manchester United have certainly not ‘just’ decided they like the look of Cengiz Ünder, as Il Messaggero made a fairly big deal of it back in November 2018.

On top of that, there was an article in the Turkish media back in June 2018 stating the Red Devils travelled specifically for the young forward when he was still at Basaksehir.

So it’s fair to say Manchester United liking what the Roma forward has to offer isn’t anything new.

It’s ongoing, and for good reason, because he’s rather quite good at what he does.