Ousmane Dembélé is out of contract at Barcelona at the end of the current season and having refused to sign a new deal, he is set to leave the Camp Nou as a free agent in the summer.

A handful of clubs are already named as the winger’s suitors and this includes Liverpool.

At the start of this year, multiple reports from Spain indicated the Reds are in the mix to sign him. On February 7th, Sport stated the 24-year-old ‘has been approached’ by the Merseyside club.

Fast forward to March and Mundo Deportivo journalist Xavier Bosch explains the France international could be headed ‘towards Paris or Liverpool’, if he were to not sign a new deal with the La Liga side.

According to Bosch, the former Borussia Dortmund attacker could move to Paris Saint-Germain in the summer, where he could replace Kylian Mbappé and reunite with Lionel Messi.

The Ligue 1 side could be a ‘comfortable destination’, considering he was born in Vernon, an hour’s drive from Paris. 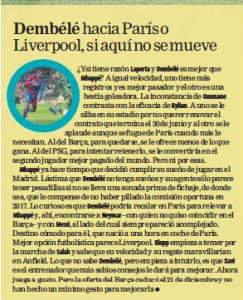 Bosch, however, suggests the attacker should pick the Premier League side over PSG as, according to him, the ‘best football option seems Liverpool’.

According to the report, Jürgen Klopp is beginning to fear he will be without Mohamed Salah next season and is aware Dembélé’s ‘pace and dribbling would amaze at Anfield’.

This is to indicate the current Barca player could replace the Egyptian at Liverpool, if the latter were to leave them.