Home Europe Tottenham have approached player to sell their plan to him – Transfer...
SHARE

Tottenham Hotspur are one of the clubs to have ‘approached’ Paris Saint-Germain’s Ángel Di María.

That’s according to today’s edition of L’Equipe, who detail his contract situation and also the clubs who are looking at how this develops at the Parc des Princes.

His current deal runs down at the end of the season and the Ligue 1 winners have a plan to retain him beyond the summer.

It’s claimed the 32-year-old received an extension offer from the French club at the end of 2020. He earns a gross salary of €1m per month and the new deal includes a pay cut. The player understands everyone must ‘make an effort’ in the current climate.

Di María, who is looking for a two-year contract, is not yet satisfied with the conditions proposed by PSG and hence, ‘no agreement has been reached yet’ between the two parties.

The former Manchester United man and his family are happy with their life in Paris and the player’s idea is to finish his time in Europe with Les Parisiens.

L’Equipe explain the Argentine is one of the most consistent players in recent seasons, which is why he still has a market in Europe.

Tottenham get a mention, along with Juventus and Inter Milan, and it’s claimed the north London club and the two Serie A sides ‘follow him’ and approached him to ‘brag’ about their respective projects.

Di María played under José Mourinho at Real Madrid, and if the winger moves to London, the pair will then reunite at Tottenham. However, that may be difficult because the player’s desire is to continue with his current employer.

According to the report, the two parties retain a desire to continue their association beyond this campaign. Therefore, the contractual differences are unlikely to ‘derail the negotiations’. 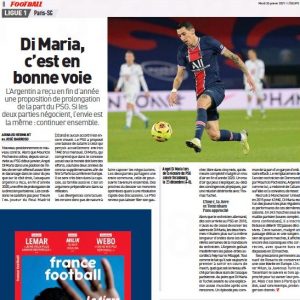 Mauricio Pochettino’s arrival should also help since the wideman didn’t share a good relationship with Thomas Tuchel at the end of the latter’s tenure.

PSG doesn’t want this case to drag on and those close to the matter are wanting a quick resolution.