Home Europe Club have Manchester United player ‘in the picture’ for January after agent...
SHARE

The former arrived in England from Peñarol, but is yet to feature for the Red Devils’ first team.

Reports from Spain last week explained the 19-year-old could go out on loan in January in order to gain first team experience. This was also backed up by his agent.

“We’re working on that, surely Spain is the destination,” Edgardo Lasalvia told Fichajes.

Since then, Sassuolo have joined Celta Vigo and Almeria in the list of clubs looking at the possibility of taking the winger in the ongoing window. On January 25th, Padova Sport explained Serie B side Monza have ‘set their sights’ on the Uruguayan.

Het Belang van Limburg on Tuesday explain Club Brugge have the United player ‘in the picture’ for January.

The Jupiler Pro League side want a winger in the winter market after deciding to allow Emmanuel Dennis to join FC Köln on loan until the end of this season. 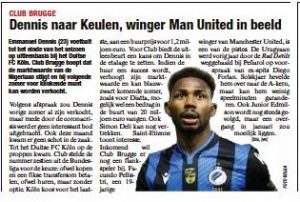 It’s claimed Pellistri is one of the targets for Club Brugge and that’s the only information mentioned about the South American.