Home Europe ‘Time for exits’ – Southampton have made €6m offer for player, around...
SHARE

Southampton are keen to sign Bologna’s Mattias Svanberg this summer and have already made concrete efforts to seal the transfer.

On June 22nd, we carried a report from Gazzetta dello Sport, who stated the Saints have already reached an agreement with the midfielder over the duration of the contract and salary.

It was also explained Southampton have not managed to agree a deal with the Serie A side over the transfer fee, but the talks between the two clubs are ongoing.

Bologna are working to bolster their squad for the 2022/23 campaign and are currently working to tie up two deals.

That’s discussed in today’s Gazzetta dello Sport, who explain that it will be ‘time for exits’ after these two acquisitions.

This is when Ralph Hasenhüttl’s side wanting the Sweden international gets a mention.

It’s said Southampton have made an offer of €6m, but this figure isn’t enough to convince Bologna. 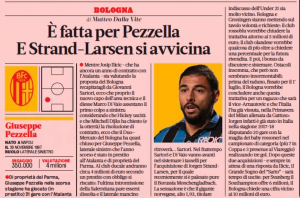 Gazzetta state the Italian club want €10m to part ways with Svanberg in the ongoing window.

Whether Southampton table an improved proposal or whether Bologna will accept a compromise needs to be seen.