At the start of this month, Gazzetta dello Sport explained that Southampton have a firm interest to sign Bologna’s Mattias Svanberg.

The Saints received an encouragement when the midfielder admitted he is open to leaving the Serie A side this summer.

Southampton have now taken steps to secure the 23-year-old’s signature, if a report from today’s Corriere Bologna is to be believed.

The Sweden international will leave Bologna in the ongoing window and St Mary’s Stadium is likely to be his next destination.

Ralph Hasenhüttl’s side and the player’s agent, Martin Dahlin, have ‘already reached an agreement’ on the duration of the contract and his salary, and it’s now down to the two clubs to find an agreement.

It’s claimed the negotiation is ‘going on’ with Southampton, but there is difference in supply and demand, and also another factor. 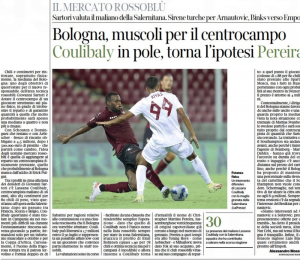 Bologna have asked to retain a percentage on Svanberg’s future sale, while the Saints are not willing to accept it.

This could be an attempt to raise the price to €8-9m.

With the player reaching an agreement with Southampton, via his agent, the deal can be carried out only if and when the two sides can reach an understanding for his transfer.