Even though the Portuguese media remains confident that Wolverhampton Wanderers are close to signing Matheus Nunes from Sporting, there’s still an open door for other clubs to come and hijack the deal.

This affirmation is today made by newspaper Record, who points out that the midfielder is currently on Barcelona’s table.

The outlet insists that the agreement with Wolves ‘is ready to be signed’, with the Molineux being ‘the most likely destination’ for the player.

However, in a meeting between Barcelona and agent Jorge Mendes, Nunes’ mention was named as a potential signing.

With the Catalan club possibly selling Frenkie De Jong, they’d need someone to replace him, despite their financial difficulties. 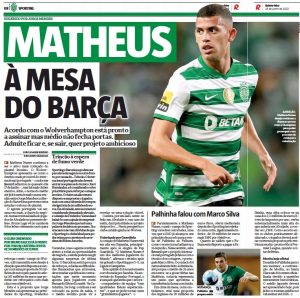 Record writes that Wolves are willing to spend €45m plus €5m on Nunes, and that’s the offer Jorge Mendes will present.

It’s said the representative, who’s ‘attentive to all opportunities of business’, will be key.

The good thing for the Premier League side is that Barcelona are struggling with money because according to the newspaper, Nunes is set to prioritise the club who offers him the best sporting project, and in that case, he’d rather move to the La Liga side.

Chelsea ‘expressed interest’ in signing – Club identify player as ‘man to sacrifice’, they only want cash

Leeds United ‘choosing to listen’ to club for player’s sale –...