Christian Eriksen has been linked with a move to Inter Milan for some months, and those claims built over the past week or so.

The Italian slant had long been that Inter weren’t so keen on a January signing as they’d rather wait to get the player for free than send money to Tottenham in the January window.

Some Italian slants changed that slant towards the end of last week, saying Inter were moving to get the player in the January market.

Then on Friday, Danish newspaper Ekstra Bladet published a story covering the Serie A claims and adding their own information. It was stated: ‘An agreement between the parties is likely to be finalised over the next few weeks, so a change can take place now in January.’

On Sunday we covered a report from Corriere della Sera which explained Antonio Conte wants a January recruit with Serie A experience, so if he has to choose between Eriksen and Arturo Vidal, it will be the Barcelona player who gets the nod. 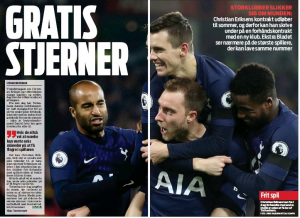 Monday’s edition of Ekstra Bladet has a feature on players who can move in the summer for free, and the Tottenham star takes up most of it. Strangely, Inter Milan doesn’t even get a mention.

There’s not one word about the Italian club, and one would expect that if Ekstra Bladet are so sure he’s going there then they would have mentioned it.