Paris Saint-Germain were credited with an interest in signing Tanguy Ndombele in the winter market.

On Saturday, TF1 journalist Julien Maynard reported the Tottenham Hotspur player will not join PSG because the Ligue 1 side failed to free up space in their squad.

Later that day, Maynard also explained Lyon have now entered the scene and have held talks with the north London club to take the midfielder on a loan deal.

L’Equipe have backed up Maynard’s claims and provide more information on this case in today’s edition of the newspaper.

Spurs took the 25-year-old from Lyon for €60m and the report now claims the French club have contacted their former player’s entourage to take him on a temporary deal until the end of the season.

The ‘challenge’ for Peter Bosz’s side, however, will be to ‘meet the financial conditions’ to cover part of the France international’s ‘generous salary’ he receives at Tottenham. 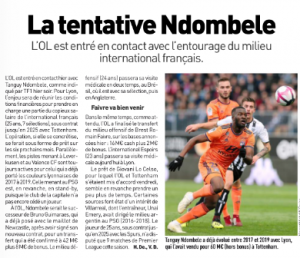 If the loan deal goes through, Antonio Conte’s man will be Bruno Guimarães’s successor as the Brazilian is all but set to join Newcastle United.

Lyon, however, are not the only club in the mix since, for Ndombele, the track leading to one of Valencia and Bayer Leverkusen ‘still remains active’.

Meanwhile, Maynard took to Twitter to report Ndombele is ‘heading to Lyon’. The journalist says the return to the player’s old club is now the ‘most serious option’, and ‘final details’ are being negotiated.