Martin Braithwaite hasn’t exactly been gushing about his time at Middlesbrough since joining Leganes on loan in the winter market.

The 27 year old scored three goals in his first seven La Liga appearances. He also scored against Real Madrid in January, in the Copa del Rey.

In March he made it clear he had no intention of returning to the Championship club.

Much of that was down to Tony Pulis, with the Danish international making it clear he wasn’t a fan of the manager’s football. Now Pulis has gone, it still doesn’t sound like there’s any desire to return.

Speaking to Marca, Braithwaite has explained a desire to stay where he is: “Of course. In football I discovered that everything is possible, so let’s wait and see. My family and I have been very happy in Spain and in Leganes.

“I have really enjoyed the time I’ve been in Leganes. I always wanted to play in Spain when I was a kid. I’m glad I did it for six months, but it’s just the beginning.”

The footballer believes he’s shown ‘a small percentage’ of what he can do, but feels he’s proven he can play at a high level.

Asked about scoring against Real Madrid, Barcelona, Sevilla and Valencia, he said: “It shows the level you have. Scoring against Real Madrid once can be luck. But doing it against all the best, except at Atletico, shows that you are consistent and that in the big games you can make a difference and leave a mark. In these matches it is difficult to find spaces and scoring options. What I have achieved is not a coincidence and it shows me that I can compete and be with the best.” 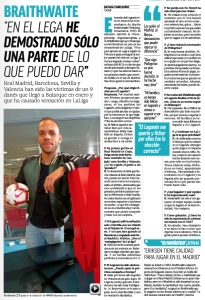 That isn’t really telling the full story, because Braithwaite has only scored 5 times since his move, with the other club he netted against being Rayo Vallecano. And he’s only scored once since February.

Last week we covered claims from Spain that Leganes see signing him permanently as more complicated compared to other options they have.

Middlesbrough have him on a contract until June 2021, and may be asked to agree to another loan.