Bruno Labbadia helped Vfl Wolfsburg finish the season in sixth spot and that was sufficient to qualify for the Europa League.

The Bundesliga side have travelled to China for a short trip and once they return from the Far East, the manager will take a make a decision on his future. He already said goodbye to the fans following Wolfsburg’s 8-1 win over Augsburg at home.

According to SportBild, the 53-year-old would like to explore two or three meetings regarding his future and West Bromwich Albion are one of the clubs looking at the coach.

The Baggies sacked Darren Moore in March and appointed James Shan as caretaker until the end of the season. Having finished fourth in the table, they were knocked out by Aston Villa in the play-off semi-final.

After narrowly missing out a place in the play-offs, West Brom want to achieve promotion to the Premier League, which is why they have set their sights on Labbadia.

Labbadia arrived at Wolfsburg in January 2018 when they were battling at the bottom half of the table and within 18 months, he’s helped the German club to qualify for the Europa League. 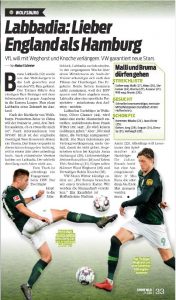 It’s claimed the Championship side are not the only club chasing Labbadia.

His contract at Wolfsburg expires in the summer and he already has an offer from his former club Hamburg, while Chinese clubs are also keen on signing him.

This one wouldn’t be easy for West Brom.