Real Madrid have got themselves a Gareth Bale shaped problem, and it’s proving to be a bigger issue than they will have hoped.

With Zinedine Zidane and the club making it as clear as they can they want the Welshman to leave, the perfect scenario would have been Manchester United’s Ed Woodward turning up and paying more than he really should.

That was hoped for, but Woodward hasn’t taken the bait, at least not yet.

Indeed, Marca reiterate on Wednesday that there’s been no offers for the former Tottenham player, and now the situation is a complete ‘mess’.

Madrid are now involved in another Bale ‘war’. They had one when signing him from Spurs, and now face another hard battle to try and get him out.

After Madrid’s last game of the season, the footballer didn’t say goodbye to his teammates, leaving for holidays ‘with the firm intention of remaining linked to the white club when he starts next season’.

Bale has a contract lasting until 2021, earning €17m a year after tax, and ‘has no desire to facilitate his departure’.

His family are happy in Madrid and don’t want to leave the city.

In the corridors of power at the club they’ve launched ‘Operation Bale Exit’.

Zidane and Real Madrid have hit two walls, one is the player and his agent being as tough as they can, and the other is a complete lack of offers. The plan had been to tell the 29 year old he wasn’t wanted and then look at the offers he and his representative would quickly bring. 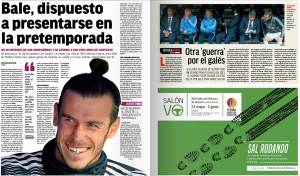 Bale is ready to return for preseason and, as it stands, won’t rule out the possibility of continuing at the club… regardless of what Zidane thinks.

That’s one big problem, but the lack of offers is perhaps more concerning.