In the same report, it was also explained that good relations between the two managers helped the Bundesliga side take Angeliño on a loan deal in the winter market.

Leipzig have an option to make the left-back’s transfer permanent for €22m in the summer.

This week’s edition of SportBild interviewed Angeliño and asked if he would rather play in the Champions League with the German club than just in the domestic competitions with City.

Responding to that, Angeliño said: “I feel very comfortable in Leipzig. I have to focus on RB.”

Manchester City have been handed a two-year European competition ban from UEFA.

SportBild asked if a lack of Champions League football at the Etihad will be a factor when deciding his future, the fullback said: “Of course, this hits every club and every player hard.”

City re-signed the Spaniard from PSV Eindhoven last summer and after failing to feature regularly with the Premier League winners, they allowed him to go out on loan.

Despite spending a short period under Guardiola’s guidance, the manager has had an influence on improving Angeliño’s game.

“In the past six months when I worked with him, I didn’t immediately understand where and how he improved me,” Angeliño explained.

“Now when I watch videos of how I behave on the pitch for Leipzig, I see how he has made me better. I react much faster in situations and often have the best solution ready. I can’t explain that at all, I do it automatically.” 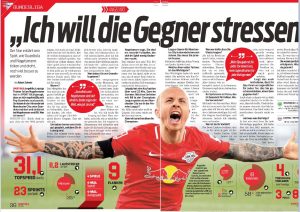 “Julian is like Pep. He works with us during the week and gives us the key actions. In the game it looks as if our game is very intuitive, but we got it implanted in large part beforehand,” he concluded.