Saúl Ñíguez has been linked to Manchester United over the past few summer windows and Atlético Madrid kept on referring to his hefty release clause to take him away from the club.

The situation is different this time around as the midfielder is looking for a way out of Wanda Metropolitano in the ongoing window.

According to AS, the 26-year-old’s future is ‘unknown’ since neither him nor the La Liga winners have received any important proposals that can convince them.

Bayern Munich showed interest, but didn’t take necessary steps to sign Saúl. Therefore, the Spaniard and his employer are now looking at England since the former is ‘seduced’ by the Premier League and believes he would adapt very well there.

Diego Simeone’s side, for their part, are of the belief only big English clubs will be able to undertake an operation to sign their player by tabling an important offer.

Recent reports of Liverpool’s interest are highlighted, followed by the possibility of moving to Old Trafford. 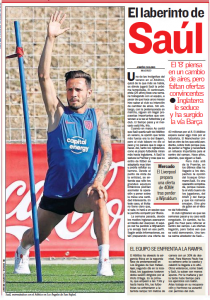 AS state Manchester United could be an option, but it’s ‘pending’, depending on what will happen with Paul Pogba’s future.

Even if Ole Gunnar Solskjaer’s side were to lose the Frenchman this summer, it’s not certain the Red Devils will look to replace Pogba with Saúl.

AS’ report presents more of Atlético’s hope for United to come forward for the midfielder [if Pogba leaves] than there being a genuine interest from them.