Chelsea and AC Milan have been ‘formally interested’ in Barcelona youngster Alejandro Balde, according to a ‘Top Secret’ report from Mundo Deportivo.

The Serie A side wanted to take the 17-year-old last summer and submitted an €8m bid, which was turned down by the Catalan club. The Blues have showed interest in the youngster in the ongoing window.

It’s said the left-back is a ‘modern, powerful and offensive’ fullback, who would ‘adapt perfectly’ to English football. For this reason, the west London club tried an approach.

After the Champions League winners ‘formally’ showed interest in the Spain U18 international, Ronald Koeman’s side were in a ‘hurry to renew’ his contract.

Mundo state Barcelona have ‘got to work’ and held talks with Balde’s representatives to close his renewal as soon as possible. 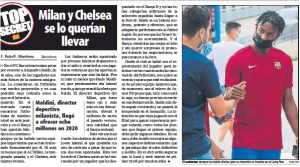 Balde as a backup for Jordi Alba in the first team.

Despite interest from Thomas Tuchel’s side, Barcelona have the intention to retain Balde and secure his long-term future by tying him down to a new contract.