Home Europe Manager says Man United have signed player who will be ‘one of...
SHARE

The Portuguese boss has given an interview to newspaper Record this Saturday, and was asked about his club’s biggest sale of the transfer window.

Quizzed about which way could Fred make an impact in the Premier League, Fonseca told Record: “Fred will be, in short term, one of the best in the world in his position. He’s a unique player.”

The manager was also asked if he spoke to his compatriot José Mourinho before the transfer was closed: “No, I didn’t speak to José Mourinho.” 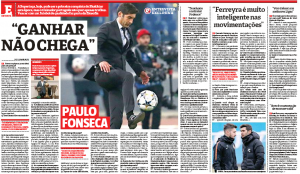 Signed by Shakhtar Donetsk in a €15m deal from Internacional in 2013, Fred made 155 appearances for the Ukrainian club, winning three league titles in this period.

The midfielder has now signed a five-year contract with Manchester United, with the Red Devils paying a €59m fee for the transfer.

He’s now finishing his post World Cup vacations and should join the preseason squad next week.