With Mauro Icardi’s situation at Inter still up in the air, the Italian newspapers are having a bit of a field day with potential replacements.

The Argentine is a key player for Luciano Spalletti when he’s fit or not trying to get a (probably deserved) improved contract, but, should he leave, one name keeps popping up: Romelu Lukaku.

Losing his starting spot in the middle of Manchester United’s attack since the arrival of Ole Gunnar Solskjaer, the Belgian has had to make do with sporadic starts down the right, featuring there against Arsenal in the FA Cup and against Liverpool at the weekend.

According to Corriere dello Sport, Lukaku ‘intrigues Inter a lot’ as the possible Icardi replacement, and the money shouldn’t be an issue if they get their desired amount for the Argentina international. 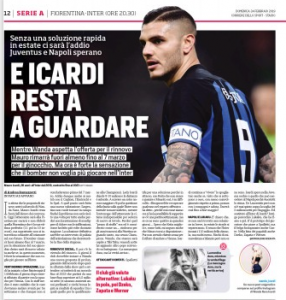 The 25-year-old has ‘all the attributes’ Luciano Spalletti looks for in a striker, but, and this is equally as important, should Inter move on from their current manager, his touted successor could still be interested in the Manchester United striker.

The Italian newspaper state Antonio Conte is ‘crazy’ about Lukaku, having already tried to sign him at Chelsea only for the Red Devils to beat him to it and having to make do with Alvaro Morata, now at Atlético Madrid.

Alternatives for the Belgian are Edin Dzeko, Duvan Zapata and Timo Werner, although Corriere dello Sport simply list them without giving details.

As things stand, it seems Lukaku is the favourite.