By the end of the last week, rumours from the English media had claimed that Alex Telles would be one of Chelsea’s targets in case Maurizio Sarri leaves the club.

The story obviously caught the attention of the Portuguese press, who now react to the possible departure of the Porto left-back at the end of the season.

A Bola brings a story which doesn’t tell much about Chelsea’s recent interest, but gives a nice point of view about the chances of the move.

The newspaper claims the Blues already tried to sign Telles last year, but weren’t able to find a deal with the Dragons, who are described as ‘excellent negotiators’. 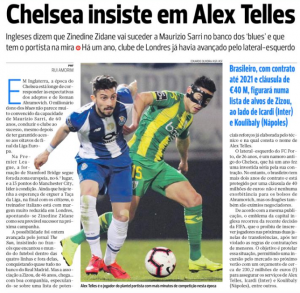 As Telles’ release clause is quite low for the Portuguese standards, Chelsea would only have to pay €40m to sign him. That’s why Porto wouldn’t accept anything less than that, and would be prepared to fight for every penny.