We’re getting to the stage where we’re seeing rumours about Bruno Fernandes’s situation every day of the week. Now newspapers are starting to bring some very different claims about the midfielder.

For example: We’ve covered A Bola’s front page story from Sunday which said Manchester United are leading the race for the player, and Sporting are likely to demand €60m or €70m for him.

However, also on Sunday, newspaper O Jogo brought a story saying Fernandes could leave the Lions for only €35m.

Due to the player’s great form, the story doesn’t make any sense, but O Jogo has a good reason to believe in that.

Bruno Fernandes was one of the players who rescinded their contracts with Sporting due to the attacks at Alcochete at the end of the last season. Now O Jogo says that when the midfielder agreed to stay and signed a new deal, he and the club agreed that they wouldn’t hold him in case a €35m bid arrives. 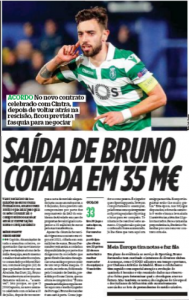 Regarding the clubs who could be signing Fernandes, O Jogo names Chelsea and Atletico Madrid, then takes recent claims to say Liverpool and Milan have been linked as well.

As Fernandes wasn’t such a big star at the start of the season, maybe O Jogo’s claims are true. However, it’s pretty clear that Sporting can make much more than €35m with his sale at this stage, so maybe a conversation would change their initial verbal agreement.