Benfica’s interest in the Liverpool left-back Alberto Moreno is back in the Portuguese media this Wednesday.

Even though the chase had gotten a lot of attention at the start of the month, with even the player’s agent teasing the transfer, things had been very quiet lately.

Newspaper Correio da Manhã brings a story saying Benfica are only going after a left-back in case Alex Grimaldo leaves the club. And there are two possibilities on the table: Moreno and Leonardo Koutris.

The Liverpool player is claimed to be the ‘priority’ in this case. He would sign for free, since his contract with the Reds is expiring, but still needs to agree a contract with the Eagles. He’s said to be demanding €3m per season. 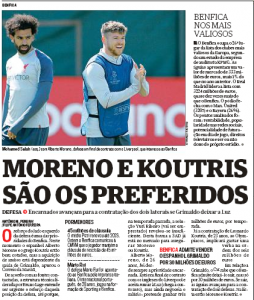 Earlier this month, Moreno’s agent Javier Moya spoke to newspaper O Jogo. He said: “There is interest in Benfica and it is something that pleases the player, because Benfica are a great club”.

But for things to happen, it seems someone needs to show up and pay €30m for Grimaldo.

Only then will the Eagles really go for the Liverpool player.