Earlier on Wednesday, we covered an article from France Football claiming that Monaco in Ligue 1 had already made contact about signing Serge Aurier from Tottenham.

The Ivory Coast international has played second fiddle to Kieran Trippier all season, yet could end up playing more if the England international, who wasn’t called up by Gareth Southgate for the Nations League, were to leave in the summer.

Napoli have been after the 28-year-old for a few months now, with Carlo Ancelotti even publicly acknowledging he was interested in the Tottenham defender, but with the Champions League final just around the corner, progress has been slow.

That doesn’t mean that everything has come to a standstill, however, as Il Mattino report on Wednesday the Serie A side will ‘continue to work’ on a deal to bring Trippier to the south of Italy. 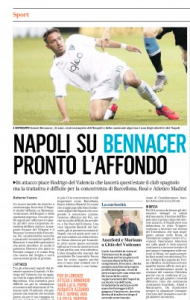 The whole operation is labelled as ‘laborious’, as it’s been dragging on for quite some time now, but Napoli certainly aren’t ready to give up yet, especially if they can find Elseid Hysaj, one of their current right-backs, a new club over the next few weeks.

With no England duty in the near future for Trippier delaying things even further, we might see more movement in early June.