Following the announcement that Rudi Garcia would be leaving Marseille at the end of the season, the Ligue 1 club set themselves the task of swiftly finding his successor, which they did.

The lucky winner was former Chelsea and Tottenham manager André Villas-Boas, who was announced on Tuesday afternoon.

Off the back of that news, L’Equipe quickly went to find someone who knew the Portuguese well enough to give an insight of what he was like on the job, and their pick was former Spurs defender Younes Kaboul.

The 33-year-old is currently without a club after being released by Watford back in December 2018, and happily chatted about his experience under Villas-Boas at Tottenham. 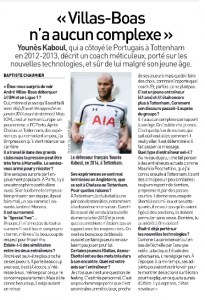 Asked why things didn’t go the manager’s way back in 2013, he said: “At Spurs, the club was in a transitionary period, especially during his second summer. Gareth Bale was sold right at the end of the window, and I think the ambitions weren’t related to real means.

“We also had a lot of injuries and a few players didn’t want to play for him. Some of them, like Gallas and Assou-Ekotto, had a few choice words for him”.

Coming off a very disappointing season, Marseille will need all the help they can get to get back to challenging for a Champions League spot, especially if Lille continue their great form into next season, adding yet another challenge for Villas-Boas to overcome.

At least his name might attract a few players in the window ahead of a season without any European football, and he’ll have to ensure he doesn’t fall out with the current squad, just like he did at Tottenham.