Liverpool are back being linked to Sporting midfielder Bruno Fernandes today.

The claims are made by Portuguese newspaper Record, who have a big story saying the Lions are planning to ‘build their future’ around the player.

The Lions are willing to protect him with a bigger release clause by offering a new contract, but they also know the difficulties they will have once summer arrives.

Record says it would be hard for Sporting to hold Fernandes as Liverpool, Milan and Atletico Madrid could all make attractive offers for the player. If a Reds offer is attractive enough, even if it doesn’t meet the current clause or a higher future one, then it could convince Sporting, according to the claims. 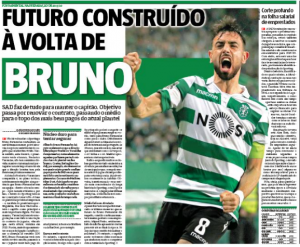 The newspaper writes that it would be unlikely for the clubs to trigger the €100m release clause, but still, they could make offers which would be hard for the Lisbon side to turn down.

It’s also claimed that Fernandes’ agent, Miguel Pinho, will only tell the player about offers he has once the season is over. So there’s no rush to guarantee his signing now.

Maybe some Liverpool fans will recall the recent claims which said Manchester United have scheduled a meeting with the midfielder’s staff. Well, that was an exclusive from A Bola, and Portuguese newspapers normally don’t get involved or even mention stories from rivals.