João Félix, Juventus and Manchester United are all involved in several stories from the Portuguese press this Tuesday.

Most of them say the Old Lady and the Red Devils are interested in paying €120m to sign the youngster, added to another €60m to get Ruben Dias.

We covered these claims days ago, when they started being published in Portugal. But now that Italian, English and Spanish outlets have been writing about it as well, the Portuguese media is back on it.

However, Record brings an exclusive which could have some impact on all this. According to their front page story, Benfica want to increase João Félix’s release clause to €200m. 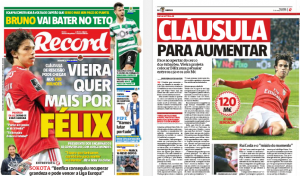 The player already has the biggest release clause in Portuguese football, but increasing it even more would be a path to keep him in the squad for at least one more season.

Record claims that Ruben Dias should continue with a €60m clause, which would give no more difficulties for Juventus or Manchester United to get the defender.

But things are going to be different with Félix, as Jorge Mendes has already been contacted by Benfica to get the player a new contract.

So maybe Juventus and United should trigger the 19-year-old’s release clause as soon as possible, before he gets even more expensive.