Liverpool have been loosely linked with Diego Llorente by a few reports over the past week.

On Sunday, AS goes quite big with it, reporting the Reds are serious about their efforts to sign the defender.

The player’s agent is thought to have spoken to the Premier League club about a transfer, trying to build a deal which would see the footballer leave Real Sociedad in the summer window.

It’s claimed Liverpool ‘intend to make an offer’, which it’s believed will be around €25m. The Spanish newspaper say La Real club sources deny anything has been received yet.

Jurgen Klopp’s side have been watching Llorente all season, according to the claims, 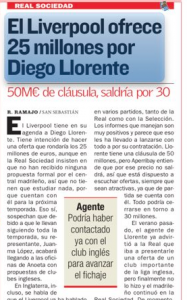 and whilst he’s protected by a €50m buyout clause, it’s thought a deal could be closed at around €30m.

AS repeat that Juanma Lopez, the agent, has been working with English clubs to try and build interest, so it sounds like the player is up for a move.

Everton and Newcastle United have also been linked this week.

Whether Liverpool’s name is being used to flush out other interest remains to be seen.