This may not be the news Manchester City fans want to hear, but the Spanish media don’t sound quite as sure over the Rodri transfer as they were a week ago.

It’s not so much Bayern Munich interest getting in the way, that’s hardly made a ripple in Spain, but more than Atletico Madrid are making serious efforts to keep the midfielder.

Whereas it was once stated the club wouldn’t be able to offer a big new contract, now things are changing. Atletico have lost several of their most high profile players, and with that goes a lot of wages.

This gives them room to offer much improved terms to player like Rodri and Thomas Partey, and increase their release clauses at the same time.

Atletico are worried about a ‘soap opera’ developing over the summer, so would like things sorted out soon, whether that means a move to Manchester City or a new deal. 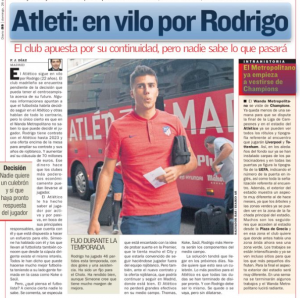 AS state: ‘It’s speculated that he is delighted with the idea of ​​trying his luck in the Premier League, that he is very tempted by City’

That’s interesting, because it sounds like they’re suggesting those claims were made elsewhere, when AS themselves have said it repeatedly.